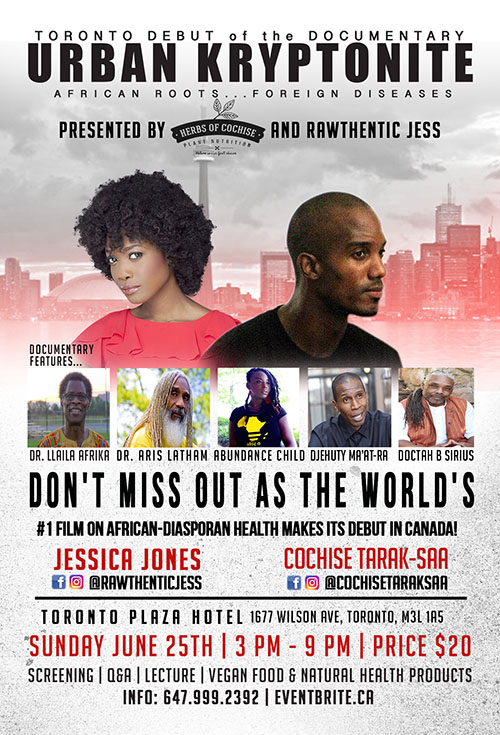 This event marks the debut of Urban Kryptonite in Canada! Urban Kryptonite is currently the number one film globally that addresses health and wellness from an African-Diasporan perspective. This includes Afro-Caribbeans, Afro-Latinos, Continental Africans and beyond!

For this event there will be a film screening followed by a Q & A. After there Q & A there will be lectures by the film’s executive producer Cochise Tarak-Saa and Toronto’s own Wellness Coach Jessica Jones!

In addition, this event will have an African Marketplace where guests will be able to purchase healthy vegan food & drinks, natural holistic health products and more!

Urban Kryptonite: African Roots, Foreign Diseases is the first health documentary ever to delve deep into the mystifying quandary of disease and death in the African and African Diaspora community. Statistics show that African Americans comprise approximately 14% of the United States’ national population. Yet they suffer disproportionately from a myriad of diseases that are maladroitly believed to be “genetic.” Oddly enough there is no empirical data linking the ancient ancestral continental Africans to many of these modern day so­-called diseases. Contrary to conventional wisdom enslaved Africans did not arrive to the shores of the Americas as a sick people. This film addresses all of the folklore and propaganda associated with sickness in the black community. After viewing this film there will be zero doubt in the minds of African descendants worldwide as to what cognitive & dietary practices should be utilized to promote life longevity!