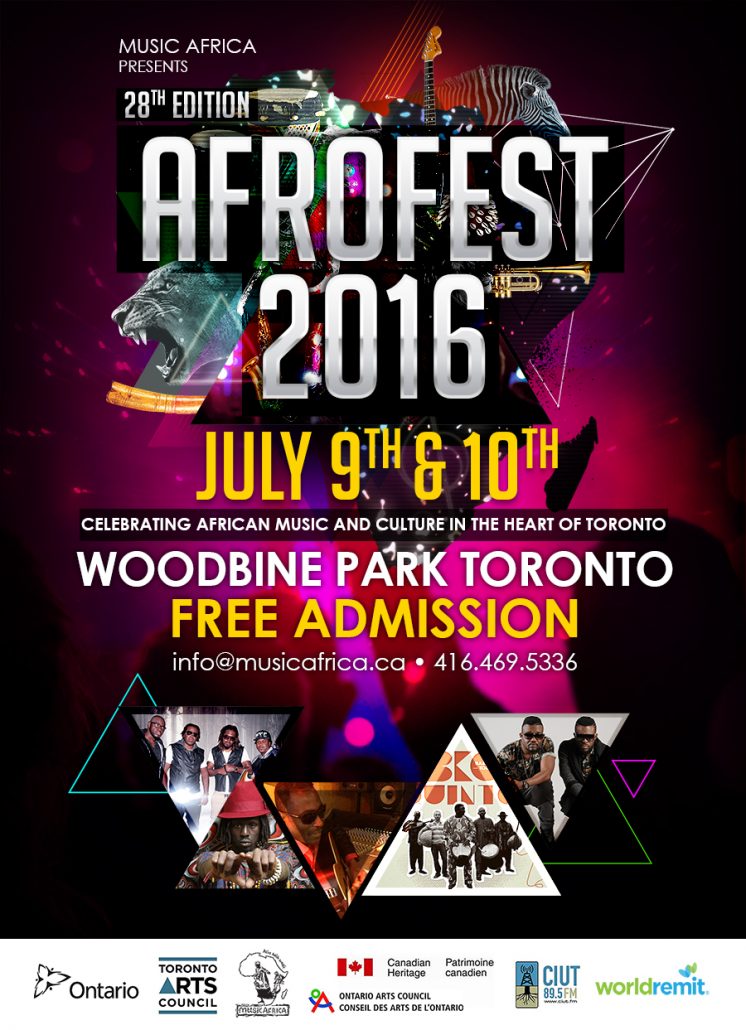 THE FESTIVAL
Afrofest is the largest free African Music Festival in North America.
Held annually, Afrofest takes place the first weekend of July at Woodbine Park in the heart of Toronto. Started in 1989 by Music Africa, Afrofest showcases the best in African music, art, crafts, culture and food. Now in its 28th year, the festival has continued to grow and so has the calibre of artists that have graced its stages.

Join us July 9 and 10, 2016 at Woodbine Park in Toronto, Ontario. (NE Corner of Lakeshore Blvd and Coxwell Toronto, Ontario)
With over 35 live performances and over 120,000 visitors in 2015, the festival is a family-friendly and fun-filled extravaganza consisting of five areas: the Main Stage, Youth Stage and Drum Stage, Children’s Village, and a vibrant Marketplace which includes a delectable selection of food vendors from across the city. Each of these distinct areas provides a diverse, cultural festival experience, offering several different spaces for attendees to spend their weekend.

The Youth Stage provides a platform to promote and support artist music and spoken word talent through host-facilitated crowd feedback. The Youth Stage also features workshops, which actively engage the audience in various elements of African dance, music and culture. Several musical instruments and topics for discussion are presented on the Youth Stage and the audience is guided to actively listen and participate in the entertainment while learning about African culture.

The Children’s Creative Village is an area designated for children and creative adults. This is another interactive area where the audience enjoys games, story-telling and art-based activities throughout the day.

The Marketplace at Afrofest hosts an average of 75 that sell products from all over Africa such as imported crafts, artwork and clothing. Vendors also include local food suppliers that promote an Africa’s diversity through cuisine.

Afrofest is inclusive and accessible with free admission. The festival is designed in such a way as to give its diverse audience the opportunity to experience various elements of African culture and its community.